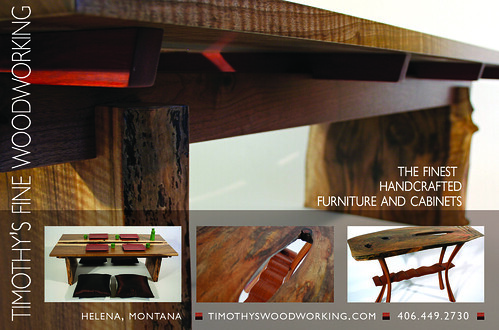 See some of my handcrafted furniture (including the Sushi Table/Coffee Table displayed in the above photo) will be exhibited at the 2008 Western Design Conference in Jackson Wyoming. The public open exhibition and sale takes place from September 4 through 6th. See link for schedule and open times. 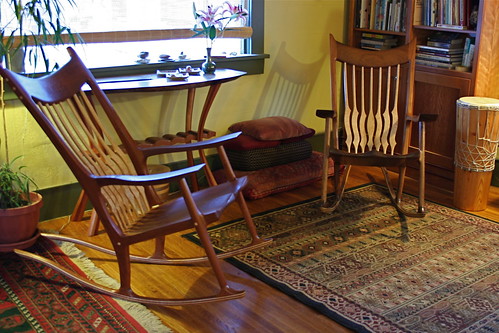 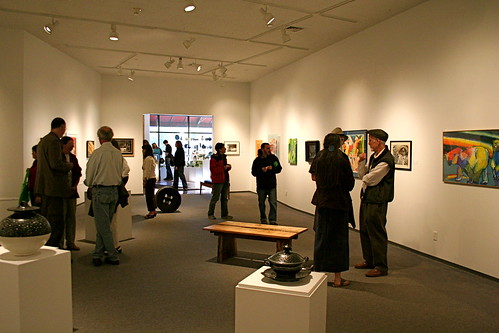 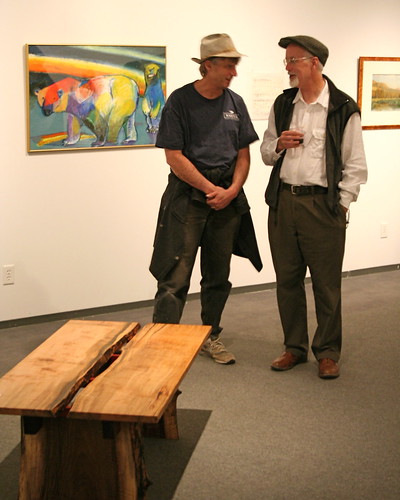 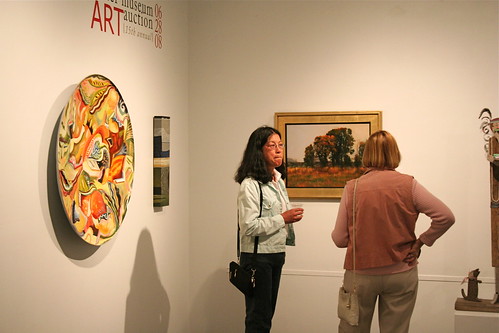 There are many excellent works of art to be auctioned in support of the ongoing programs at the Holter, including works by Rudy Autio, Jennifer Bottomly O’Looney, Dana Boussard, Chip Clawson, Russell Chatham, Sarah Jaeger, Nan Parsons …. too many to mention all of them here. Head over to this link to see all of the works for auction.

The Auction and Gala will be from 5:30-10 p.m. on Saturday, June 28, 2008. Please come and support the arts in Helena, even if you don’t plan to purchase anything at the auction. The more folks in the audience, the merrier the auction! If you don’t live in Helena, but are going to be in town that evening, please consider attending the auction. It should be a fun evening. 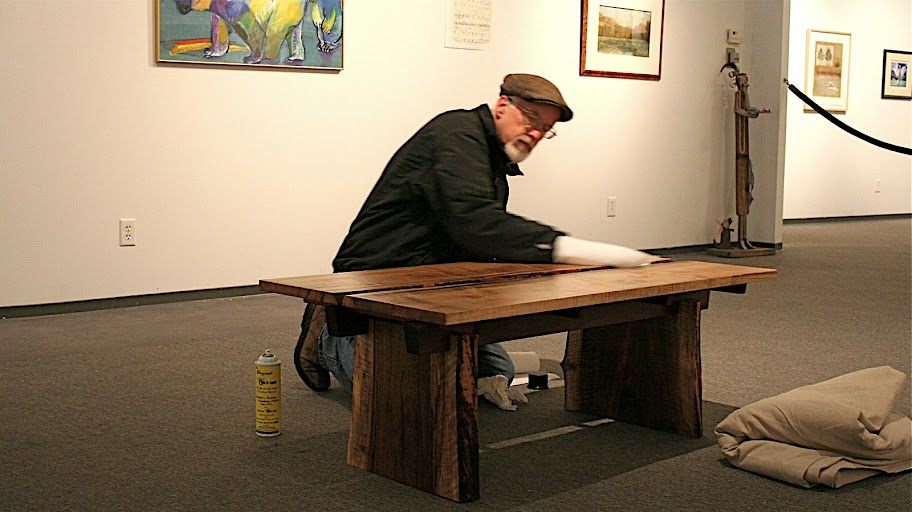 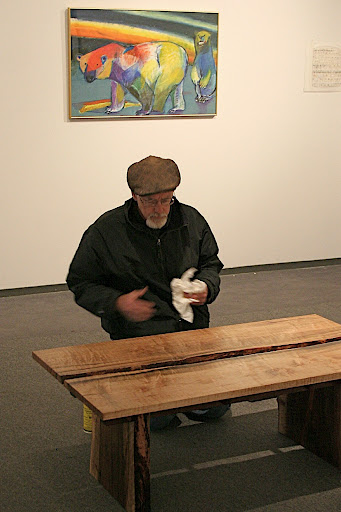 I helped Tim deliver his walnut coffee table to the Holter Museum today. He is donating this piece to the Holter’s 15th Annual Art Auction fundraiser. The exhibit is still being set up, but it looks fantastic so far! I want that polar bear painting on the wall behind Tim (left.)

All auction pieces will be on exhibit from June 6th through 28th. The Gala and Auction is June 28th at the Great Northern Hotel. 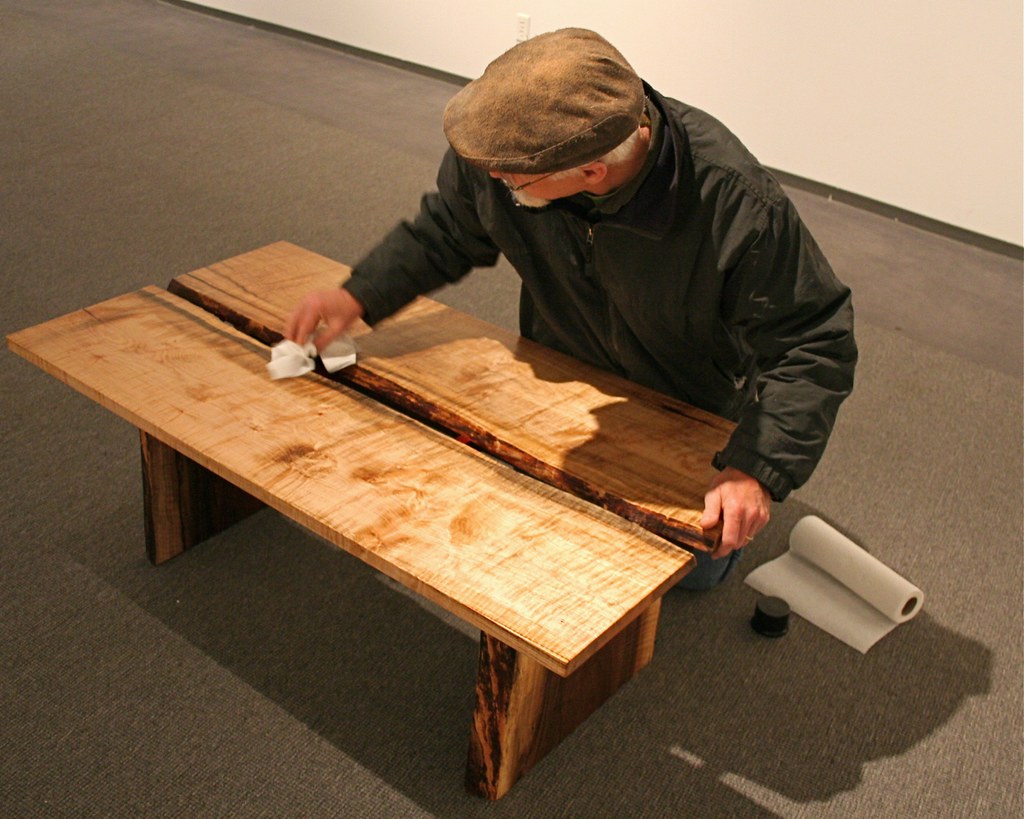 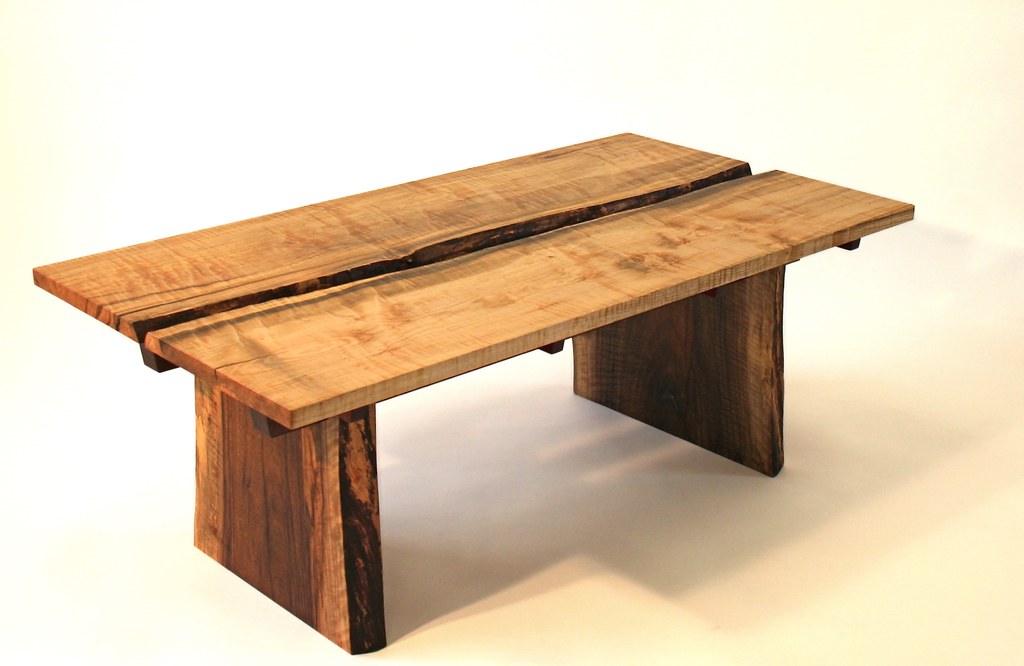 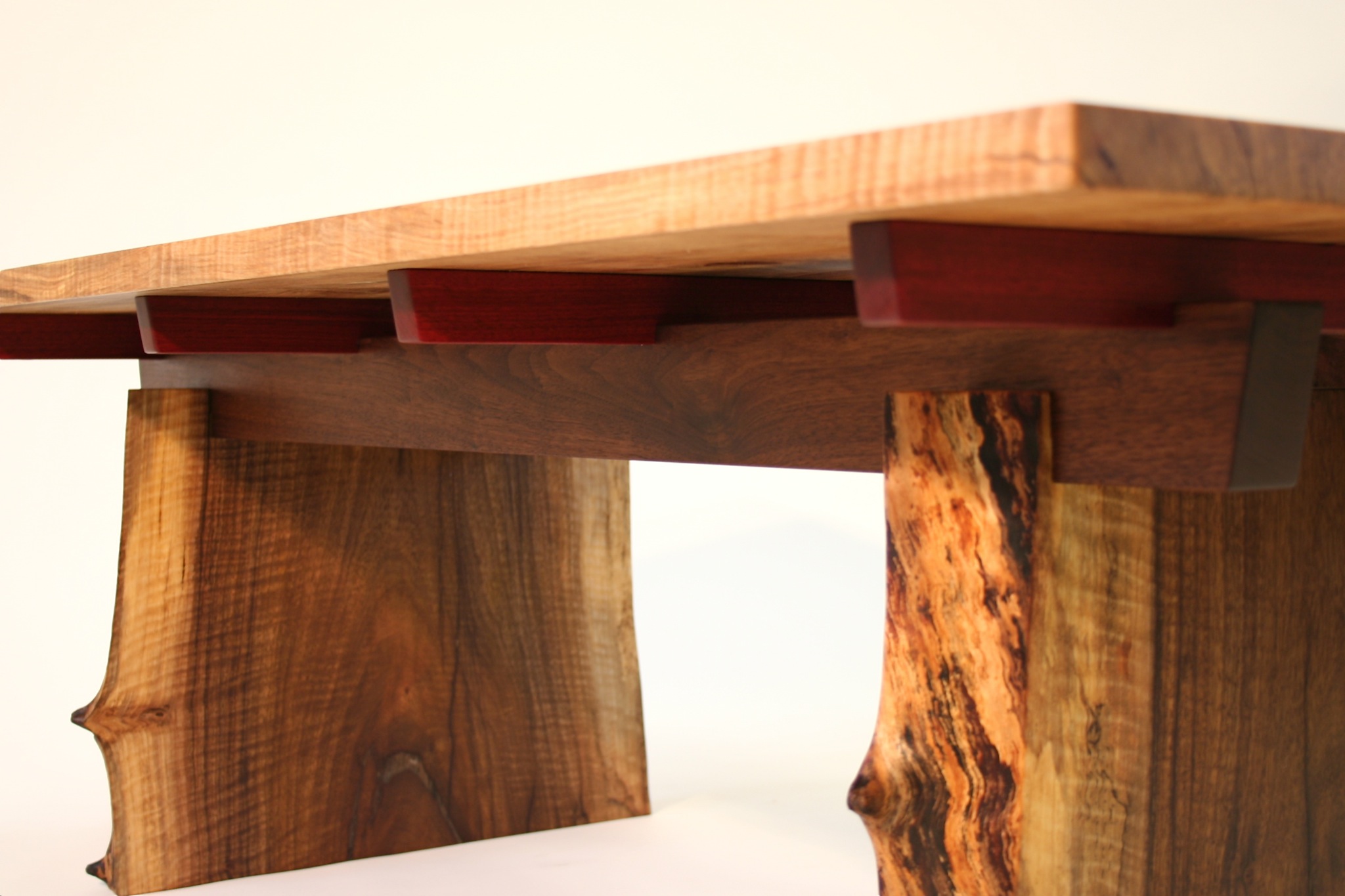 all photos copyright ©2008 by Maureen Shaughnessy 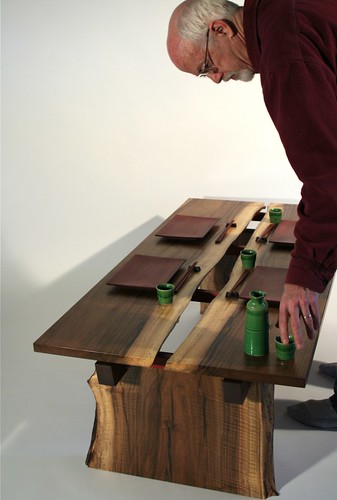 We unloaded the furniture in the late afternoon, then headed over to the Duck Inn where we stayed the night. I had made the reservation through Duck Inn’s website, so I wasn’t sure how the real thing would measure up to the photos. We were both extremely happy with the room: we had a view of Whitefish River, elegant bed linens and good inn-keeper company.

We shared a fabulous dinner at Tupelo Grille which specializes in Creole and Cajun dishes. As of that night, Tupelo’s Grill replaced Chico Hot Springs Restaurant in my mind, as the best restaurant food to be had in Montana. An excellent red cuvee: Marquis-Philips “Sarah’s Blend” wine and delicious appetizers filled us with just enough room to have their reknowned bread pudding with rum sauce. OMG! I now have a new favorite dessert. Yumm! 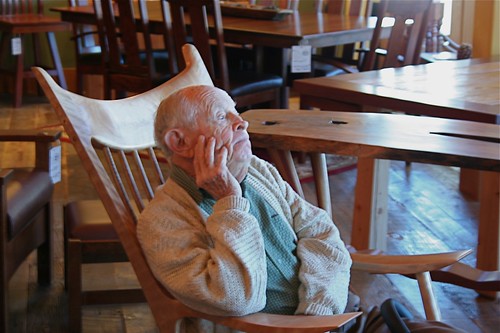 After spending the next morning at Legends gallery with owner Cindy Goodwin, and taking lots of photos of Tim’s furniture in place (most of which did not turn out — I’m really not a decent interior photog) we headed over to the woodshop of another woodworker represented by Legends, Phillip Pontillo. He was building this cabinet when we visited.

We spent a pleasant hour visiting with Phillip in his small (750 square foot) Whitefish shop. Phillip builds beautifully crafted studio furniture which can be seen at Legends. We were amazed at how much Phillip packs into his small space, and thought his shop deserves some press.

Speaking of shops and efficient use of shop-space, you might want to check out this woodworking shop, 700 square feet of efficient space for one woodworker, Matthew Teague. The link (above) is the “Final Walk-Through” post on Teague’s blog, Smart Shop which is one of the Fine Woodworking sponsored blogs.

We would like to invite you to join us for an opening reception of the Helena Woodworkers’ Guild 3rd Annual Exhibit, “Art of Wood.” The reception is from 6 pm to 10 pm Friday, November 9th during the Downtown Helena ArtWalk. The exhibit will also be open from November 2 through 30th during box office hours at the Myrna Loy Center for the Arts at 15 East Ewing Street in Helena, Montana.

Helena is home to more fine wood artisans than most people realize. Please come see the talent and craftsmanship of our members during the month of November. Even better – join us for great food, drinks, live music and the attention of our craftsman members during the reception Friday evening.

We have 21 members of our Guild, ranging from hobbyists to experienced furniture makers. Anyone with an interest in woodworking and in learning and sharing is welcome to join our Guild.

If you live too far to visit in person, please enjoy our short slideshow below, and check back for updates on the exhibit during the month of November. (clicking on the individual photos will take you to an enlarged version)

Thank you to Daniel Montesinos, for allowing me to post his photo of Baobab (Alley) Avenue in Madagascar. Coincidentally I was just reading about baobab trees, Andasonia digitata, in “The Soul of a Tree” by George Nakashima, a Seattle woodworker who was honored in 1989 at an exhibit of “America’s Living National Treasures.” That same day I stumbled upon Daniel’s photos of these weird, fascinating trees — and I wasn’t searching for baobab photos either!

Anyway, Nakashima writes that, “although baobabs are huge, sometimes reaching almost a hundred feet in girth, their ages are obscure, for they do not have annual rings like most trees.” Hmmm …. wonder how scientists do calculate the age of these trees? Nakashima mentions a baobab said to be over four thousand (!) years old.

Here is another of Daniel’s photos of these trees — they look like something out of Dr. Seuss’s imagination: 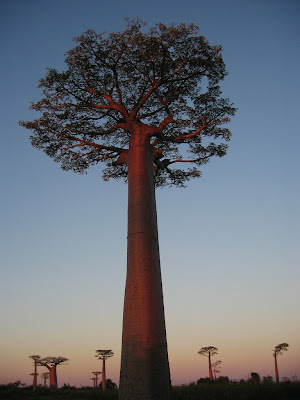 The wood of the baobab tree can be 60 to 70 percent moisture and the tree trunks actually shrink in diameter during drought. The wood is pulpy, so I’m curious why Nakashima included the baobab in his chapter on trees used by woodworkers.

The Soul of a Tree, by George Nakashima

Nature, Form, and Spirit: The Life and Legacy of George Nakashima
By Mira Nakashima 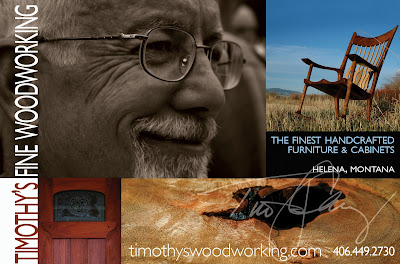 The German writer, Hermann Hesse published a thoughtful collection of poems and travel prose in 1917, titled, Wandering. The book was translated in 1974 by James Wright. One does not have to be religious to appreciate Hesse’s love of the natural world and his urge to find oneness Below are short excerpts about learning wisdom from the trees around us: 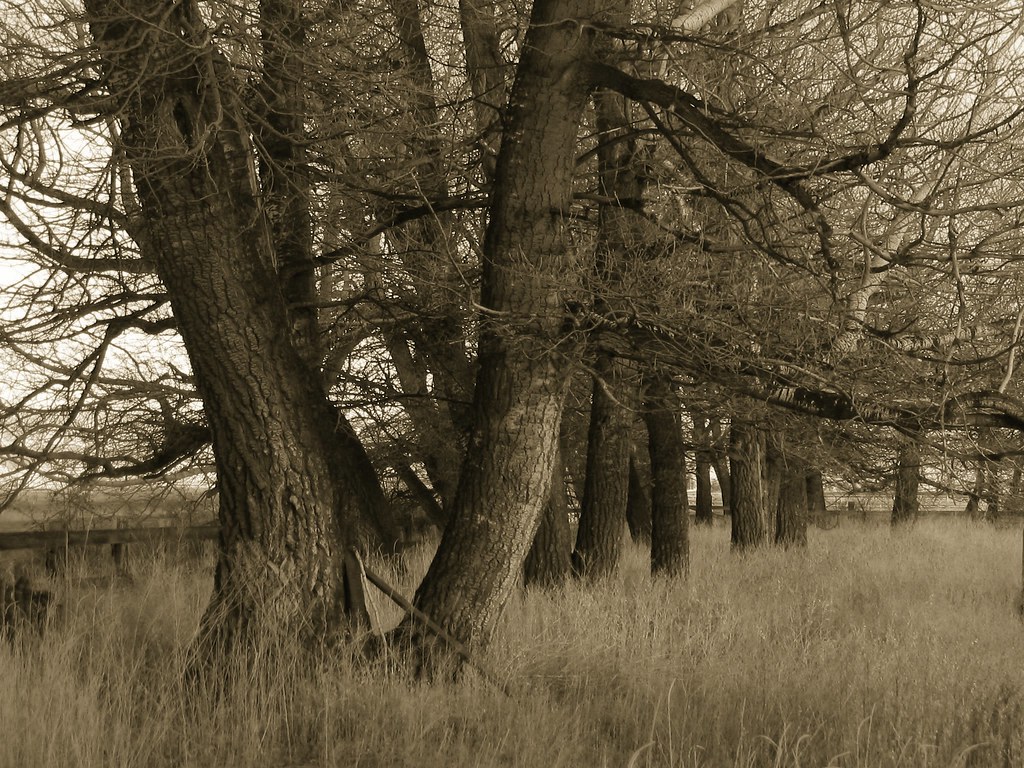 Whoever has learned how to listen to trees no longer wants to be a tree. He wants to be nothing except what he is. That is home. That is happiness. 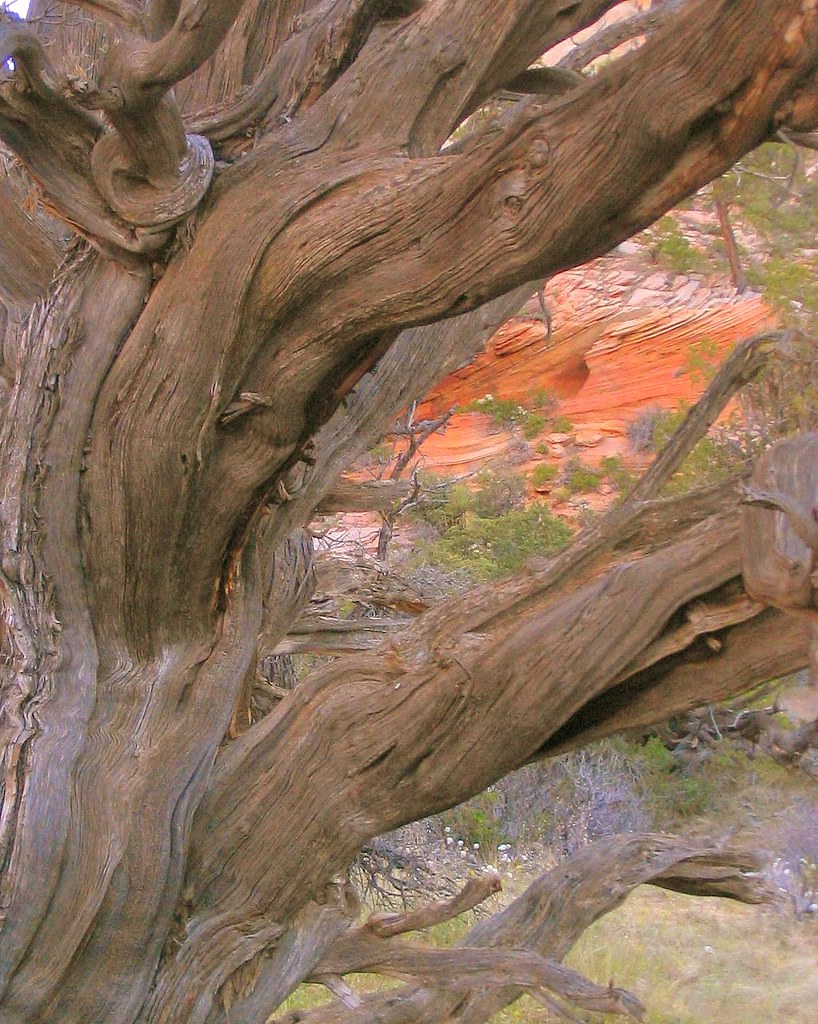 … For me, trees have always been the most penetrating preachers. I revere them when they live in tribes and families, in forests and groves. And even more I revere them when they stand alone. They are like lonely persons. Not like hermits who have stolen away out of some weakness, but like great, solitary men, like Beethoven and Nietzsche. 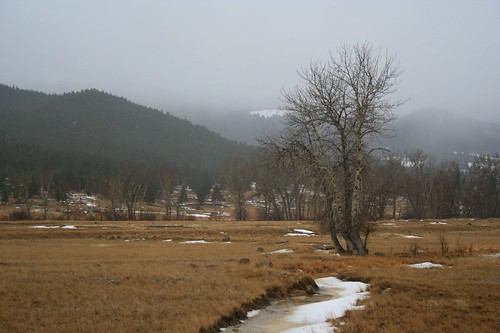 … Nothing is holier, nothing is more exemplary than a beautiful, strong tree. When a tree is cut down and reveals its naked death-wound to the sun, one can read its whole history in the luminous, inscribed disk of its trunk: in the rings of its years, its scars, all the struggle, all the suffering, all the sickness, all the happiness and prosperity stand truly written, the narrow years and the luxurious years, the attacks withstood, the storms endured. 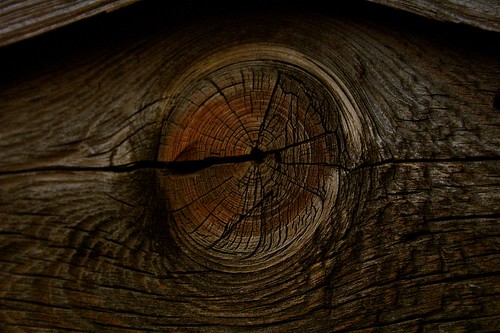 Every young farmboy (and I would say, woodworker) knows that the hardest and noblest wood has the narrowest rings, that high on the mountains and in continuing danger the most indestructible, the strongest trees grow. 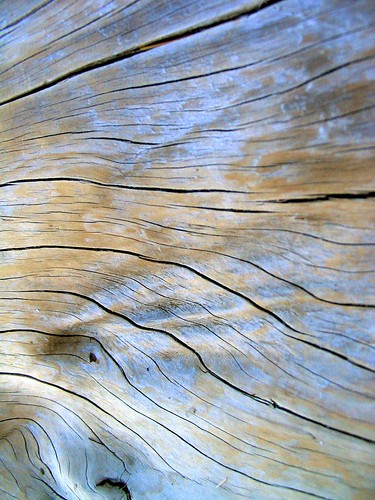 A tree says: A kernel is hidden in me, a spark, a thought, I am life from eternal life. The attempt and the risk the eternal mother took with me is unique, unique the form and veins of my skin, unique the smallest play of leaves in my branches and the smallest scar on my bark. I was made to form and reveal the eternal in my smallest special detail. 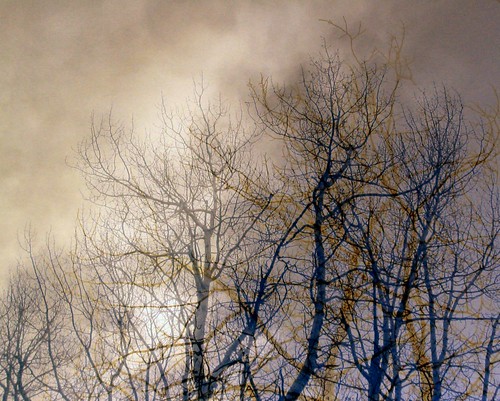 A longing to wander tears my heart when I hear trees rustling in the wind at evening. If one listens to them silently for a long time, this longing reveals its kernel, its meaning … It is a longing for home, for a memory of the mother, for new metaphors for life. It leads home. Every path leads homeward, every step is birth, every step is death, every grave is mother. 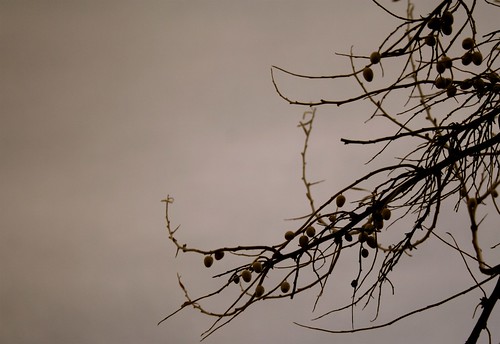 So the tree rustles in the evening, when we stand uneasy before our own thoughts. Trees have long thoughts, long-breathing and restful, just as they have longer lives that ours. They are wiser than we are, as long as we do not listen to them …

Whoever has learned how to listen to trees no longer wants to be a tree. He wants to be nothing except what he is. That is home. That is happiness.

— Maureen
The (almost) complete excerpt is posted at my blog, Raven’s Nest. Click here to read that article.

Well, Tim and Tracy cleaned the shop! And it was a rather large new “baby” that motivated the cleanup. Check it out: 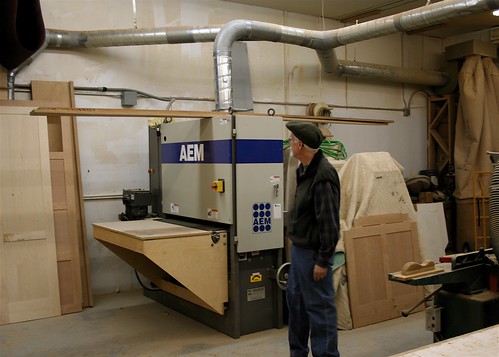 Tim is the proud new parent of an AEM wide-belt sander … he and Doug Kralicek, of Kralicek Millworks, drove over to Pinesdale, Montana to pick it up a week ago. Huge thing! 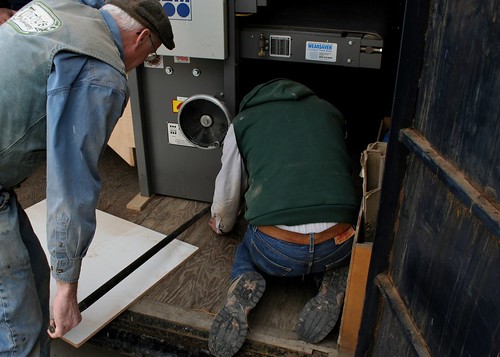 I (Maureen) had no idea how big it was until the day I dropped by to shoot some photos of the beast — it was still in Doug’s trailer and Tim, his electrician, Jim White and one of Doug’s employees were scratching their heads over how to get the danged thing out of the trailer and into the shop. 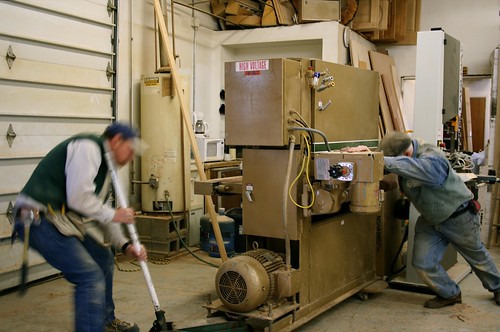 In the process of making room for the new overhead sander (and moving the older, smaller one out) Tim got all jazzed up about cleaning and organizing the shop. It was dusty. Yep. His shop was also pretty crammed with lumber, sheet goods, cabinet boxes in the midst of assembly, stuff stuff and more stuff — and oh, did I mention the sawdust? So, Tracy and Tim spent the entire last week (Tim did the weekend too) cleaning, organizing, tossing, taking stuff to our local salvaged-building-materials store — ReStore — as well as to the dump.

All these years, Tim’s had to store all of this supplies and materials for woodworking right in the shop. Some of that stuff he brought with him from Pocatello and hasn’t looked at since the day he moved into the shop. Would ya say he might not need it anymore? The folks down at ReStore were happy to have all of his give-aways and I bet now a few days later, that stuff has found new homes all over Helena. 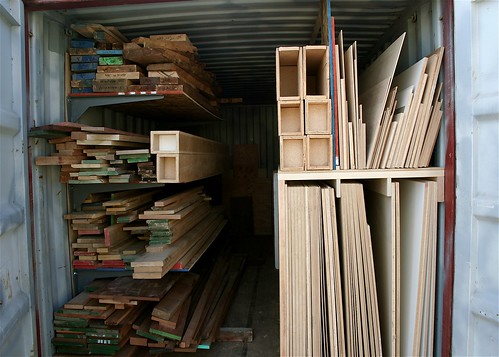 Well, one thing led to another. Or I should say, one good idea led to an even better idea. The brainstorm was to get a container to store most of the shop’s wood. That cleared a huge space. And the huge space turned into even more working room in the shop.

A few days later, I was truly amazed. Tim took me over to the shop last night to show me the changes. Whoah! I hardly recognized the place! He had re-opened a double-wide doorway between the two sides of the shop, making the work flow much more efficient and comfortable. 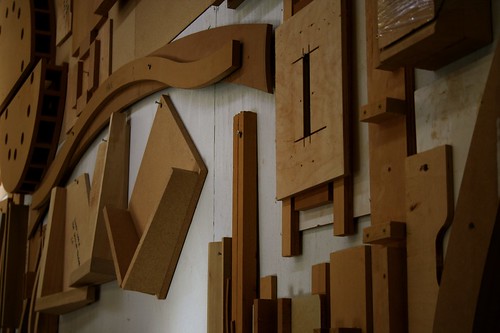 Now an entire wall is available for hanging the large collection of jigs, templates and patterns within easy reach. They divided the shop more clearly into two rooms, and both rooms are much better connected with two large doors and a large window to allow light to penetrate from the assembly room, below, into the machine room. 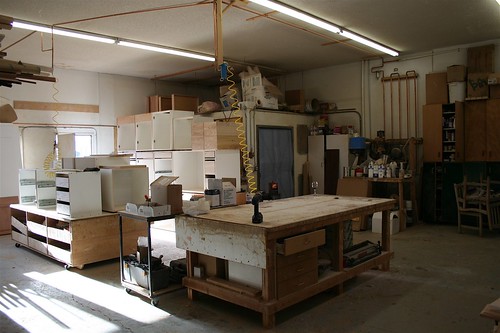 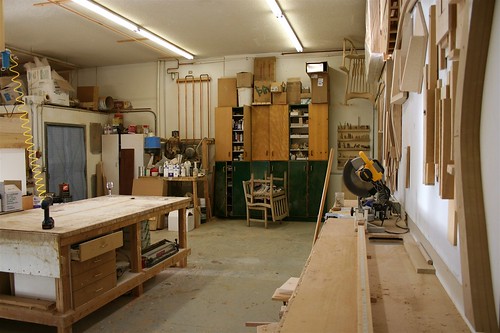 The assembly room (in both photos above) holds their workbenches, chop saw, spray booth, assembly benches, hardware storage and a cabinet for finishes. 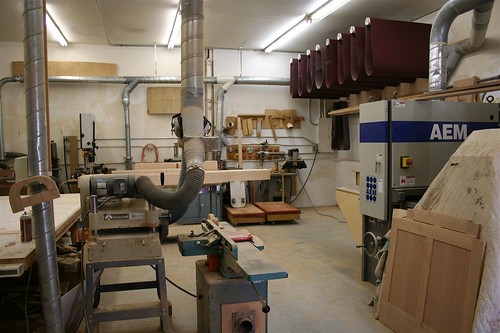 The machine room now has more room to manuever large pieces of lumber around all of the machines. 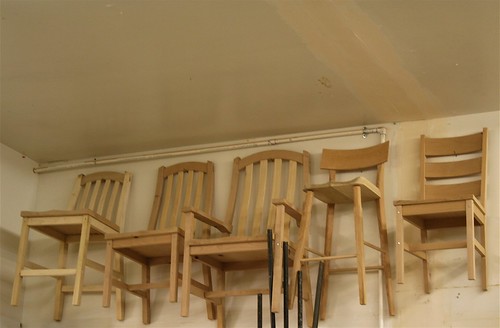 On Sunday, Tim assembled all of his chair prototypes (which had until then been mostly piles of parts.) He hung the prototypes from the ceiling. What a good idea — plus they look cool hanging up there like wallflowers at a highschool prom.

It’s going to be a much more enjoyable place to work for both guys.

Until next time,
Maureen